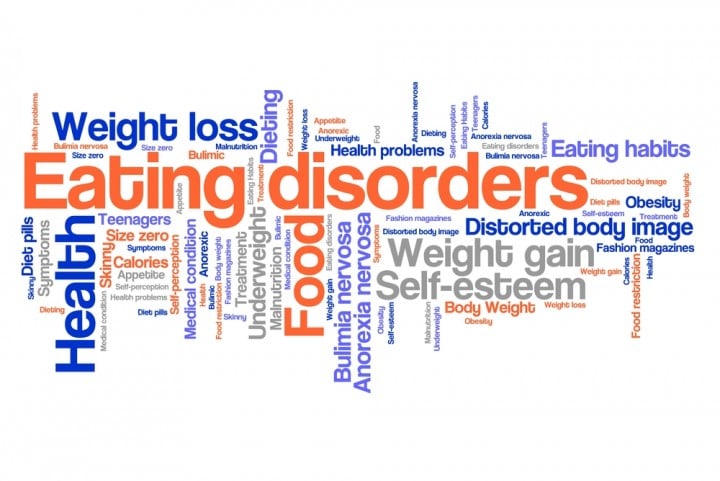 Anorexia nervosa, or simply anorexia, starts with a fear of gaining weight and an obsession about body weight that leads to self-starvation and excessive weight loss. For women, this is usually a dramatic decrease in food intake, or no eating at all. For men, this can be associated with compulsive exercise, frequently weighing himself, or a preoccupation with body building. No matter what gender, there is excessive dieting, denial of hunger, or thoughts of being “fat” despite continued weight loss.

Bulimia nervosa, or just bulimia, is characterized by self-induced vomiting to counteract binge eating. This eating disorder is similar for men and women, presenting as a feeling of being out of control while eating a large amount of food, then using laxatives or diuretics to purge the food out and control weight gain. For both genders, this behavior stems from an emotional insecurity about the body’s appearance. Those with bulimia can often fixate on a certain body part (abs, thighs, arms, etc.) and spend inordinate amounts of time working out.

Both of these eating disorders can have severe emotional and physical effects. But what if you start to recognize those symptoms in a friend or family member? How do you start that difficult conversation in hopes of getting them help? This is how the National Eating Disorders Association recommends approaching the subject:

About the Author: Lina Hu

Lina Hu is currently a doctoral candidate at the University of California, Davis in the department of Biomedical Engineering. Her thesis centers on discovering molecular imaging probes for earlier cancer detection and better treatment planning. Throughout her time at UC Davis, she has collaborated with both domestic and international groups and successfully led and participated in team-based projects that have resulted in multiple academic journal publications and presentations at scientific conferences around the country.